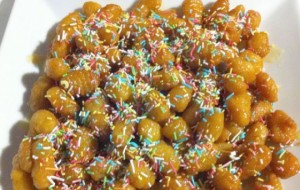 Purceddhruzzi (Purcidduzzi or Pizzi cunfitti) is typical Christmas cake very popular in Salento, Puglia and Basilicata whole. It has a dumpling shape.
The name comes from the fact that their shape is reminiscent of the little pigs. In Taranto purceddhruzzi are eaten on the day of St. Anthony Abate, on January 17, because this saint is represented with a pig on his side.
In all variants, they are made with flour, yeast, white wine, water and salt. For mixing you do not use eggs, but orange juice, tangerine and anise liqueur. They are seasoned with honey, cinnamon and Anesini.
In Greece (as in other areas of the Mediterranean), there are similar pastry called Loukoumades.