U’ Raganat, fennel and salted cod (by Peppe Zullo) 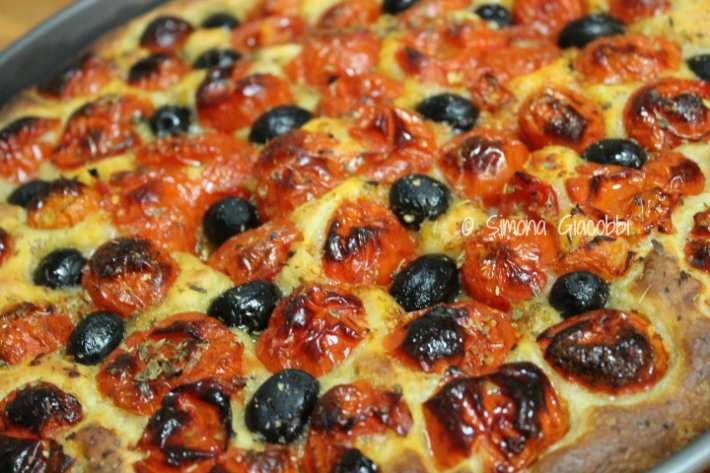 Focaccia is very famous famous in Puglia and in particular in Bari. This is a glorious recipe for focaccia barese that accounts for precise ingredients, specific quality and a traditional method of preparation. Focaccia barese is famous for its crispiness and its very oiled, low-rise dough once it’s cooked. Start acquiring the specific ingredients used to make a beautiful focaccia: oil, tomatoes and black olives and follow this recipe. It will turn out delicious!

In a large bowl, dissolve yeast in warm water. Add sugar. Let stand for 5 minutes. In another bowl mix the salt with the oil.
In a large bowl place the flour, the mashed boiled potato and add the yeast, the oil with salt and the remaining water. Mix for about ten minutes with your hands. The mixture should be very soft but not too liquid.
Once it’s ready cover the container with a cloth or plastic wrap and let sit for at least an hour in a warm place. For example in the oven with the light on or cover the pan with a blanket.
Meanwhile, in a small bowl smash the tomatoes with your hands or cut them in half and crush them to release their liquid. Add salt, toss with olive oil and oregano. Do not throw away the tomato water.
Grease very well the base and the side of a 32 cm pan with oil and sprinkle with salt. If you prefer a higher focaccia use a smaller pan but remember that the real focaccia Bari is low.
Pour the dough into the pan, without deflate it. Spread it with greasy hands without crushing until you get a homogeneous layer that reaches the edges of the pan.
Put the olives and the tomatoes. The part with the skin should be facing up. Pour the liquid from the cherry tomatoes and seasoned that you had obtained on your focaccia. Cover with a larger baking pan and then place a blanket or a towel on it and let rise for another hour.
Sprinkle the surface with salt and oregano and bake at 220 degrees for 30 minutes (ventilated oven).
If you do not have a ventilated oven put the pan in the oven at 220°C in the lower part of the oven for 15 minutes, or until you can detach the focaccia from the sides of the pan then put it under the grill on the second level and turn the heat to 180°C for 15/20 minutes until brown. Remove from oven and cover the pan with a cloth and let it cool down.